“The red box. The infinite war of Antoni Campañà”.

. Co-produced with TVC and TVE, the documentary is based on the discovery of 5,000 unpublished photographs of the Civil War in order to approach the multifaceted and unknown figure of the photographer Antoni Campañà.

. Directed by the reporter Plàcid Garcia-Planas, the historian Arnau Gonzàlez i Vilalta and the journalist Toni Monné y Campañà, the documentary questions whether the wounds of the war are already closed and tries to find answers in a transcendent question: “why did Campañà want to keep this legacy of high historical value a secret”?

.The documentary complements the exhibition “La guerra infinita. Antoni Campañà”, which can be visited at MNAC until 19 July, and is part of the basis of the book La caja roja (Comanegra), published in November 2019.

Hidden in a house in Sant Cugat del Vallès, on the verge of being demolished, are two red boxes. Inside are hidden a totally unexpected treasure: thousands of photographs that Antoni Campañà Bandranas (1906-1989) took during the three years of the Civil War: a huge frieze of the wartime life of one of the country’s great pictorialist photographers. A Republican, Catalan nationalist and practising Campañà portrayed a tragic and contradictory reality, rich in nuances and complexity, with often painful contrasts.

From church arches, victims of revolutionary iconoclasm, to portraits of such attractive anarchists that the anarchists themselves ended up using them to make postcards. From food shortage protests in front of Antonio Gaudí’s iconic Pedrera to Third Reich soldiers parading down the Diagonal in 1939. 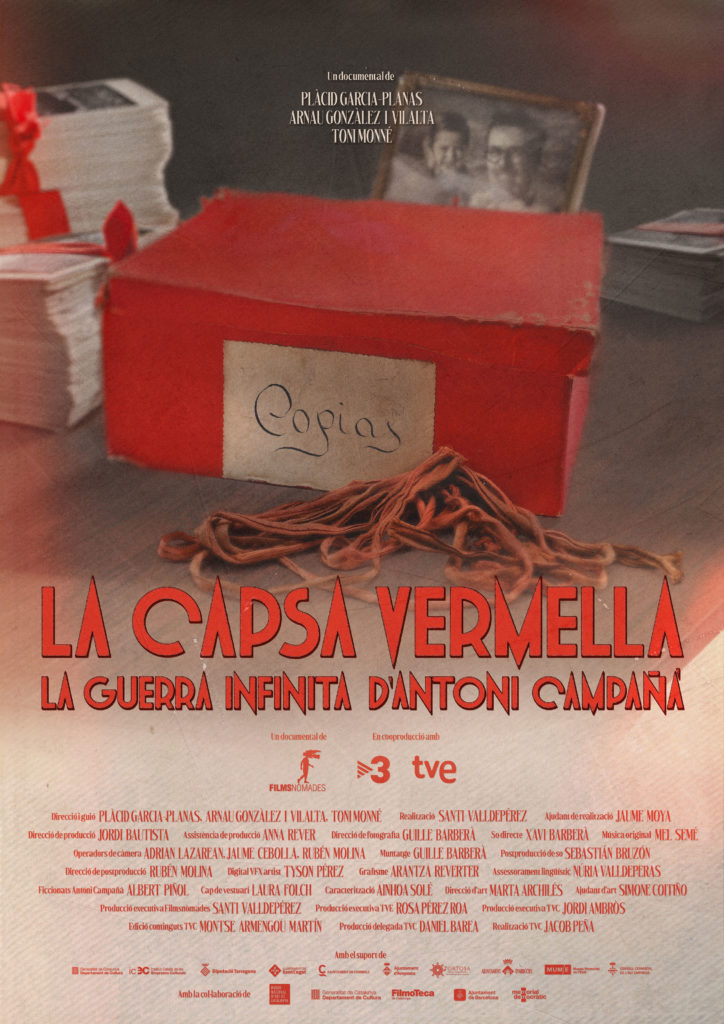 Without being a photographer for any cause, Campañà became useful for the multiple propagandas in struggle. Whether by the anarchists of the CNT-FAI or the official governmental discourse of the Commissariat of Propaganda of the Generalitat or the Spanish Republican government. Photographing everything, he constructs an enormous background, defenceless against the dictatorship of the caption. A snapshot of Campañà on the front page of the French communist mouthpiece, Le Humanité, could be the embodiment of revolution; the same image, in an Irish Catholic newspaper, the descent into hell. Seeing how some of his images were used by the propaganda of the new Franco regime from 1939 onwards, as they had been by the revolutionaries three years earlier, Campañà collected his archive of photographs, deposited in the Mas Archive in an attempt to hide them from the Franco authorities, from whom he had not complied with orders to release negatives and positives, and hid them in the garage of his house. He did not want anyone to see those photographs, but he did not destroy them.

Why does a photographer take five thousand photographs of the war in his country and end up closing them in a couple of boxes? Because it was a graphic legacy that could explode if it was not treated with care for its historical context and its content.

Campañà’s red boxes contained a particular view of the war and reveal thousands of new windows on a decisive episode with a European and universal dimension. At the same time, it questions us about the exercise of photography: is it equidistance to photograph everything?

These boxes are a powerful metaphor for what happened to Europe after this and other wars of the 20th century: the people sealed the memory of their pain in a box in order to be able to continue living. Not even when the context seemed to change, when the dictator Francisco Franco died in 1975, did Campañà allow himself to reopen his archives, denying himself and the rest of society the witness of his gaze.

Campañà questions us about historical memory. On the complex and plural coordinates with which we revisit the past and what reactions it provokes in the present. But it does something more, it forces us, it obliges us to take sides. By humanising all sides, it will be up to the spectator to judge whether his attitude was equidistant or a reflection of someone who observed the complexity of human behaviour with a certain vertigo.

You can find out more about which cookies we are using or switch them off in settings.

This website uses cookies so that we can provide you with the best user experience possible. Cookie information is stored in your browser and performs functions such as recognising you when you return to our website and helping our team to understand which sections of the website you find most interesting and useful.

Strictly Necessary Cookie should be enabled at all times so that we can save your preferences for cookie settings.

If you disable this cookie, we will not be able to save your preferences. This means that every time you visit this website you will need to enable or disable cookies again.